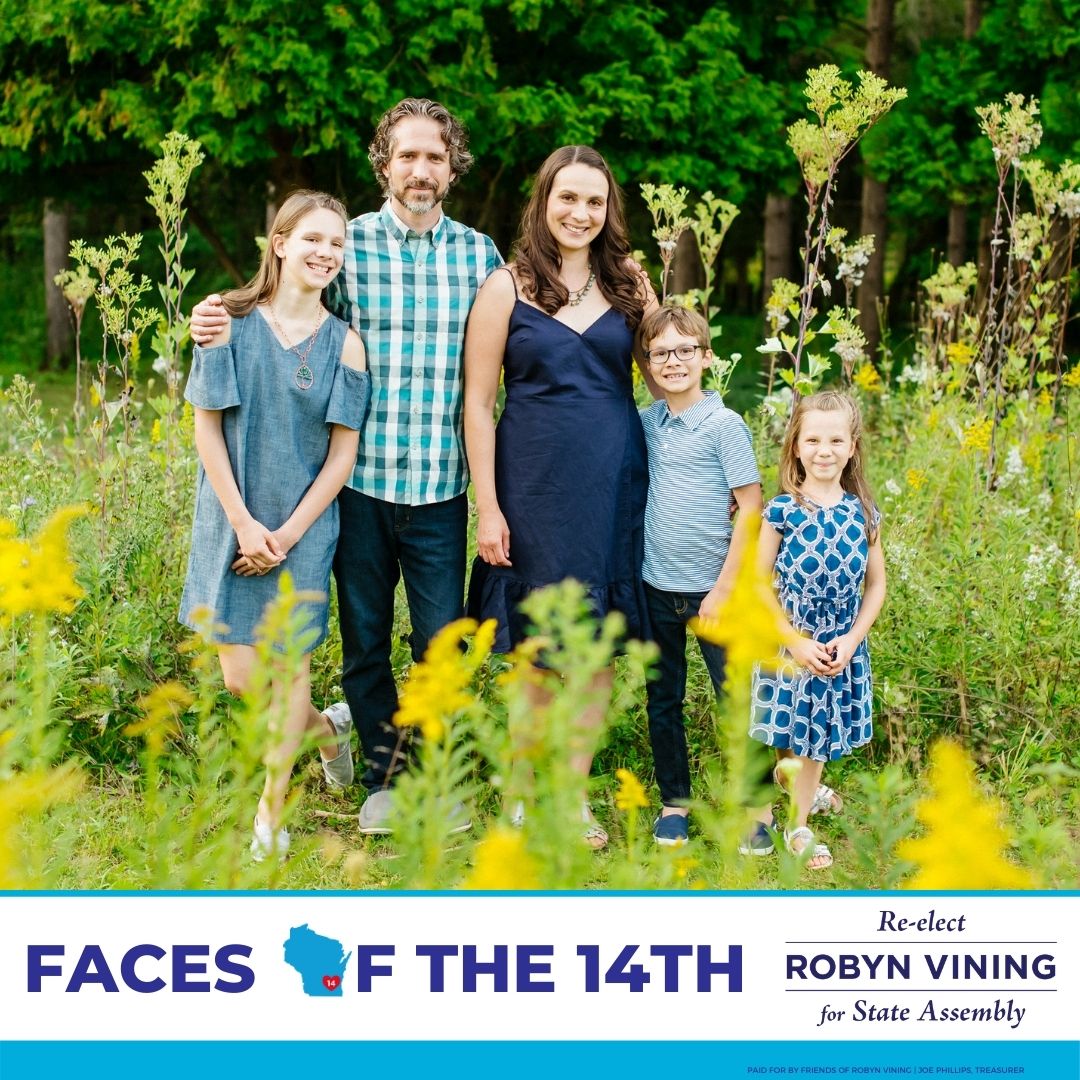 I originally started writing this in my head, envisioning a post to my personal friends on the day absentee ballots dropped in Wisconsin. At some point I realized that maybe this was my own Faces of the 14th story.

I first met Robyn Vining eight years ago through her photography business. I had friends in my neighborhood who had hired her for amazing family photos, and I saw that she was hosting a small photography class. I had recently received a fancy camera and wanted to figure out how to use it with more than the automatic settings. More than learning photography basics, I learned how Robyn approached her photography with great artistry and detail. I decided that I would hire her the next time our family had photos taken.

With the arrival of our third child, we hired Robyn to document her first year. As we got to know Robyn during our photography sessions, I became Facebook friends with her. And over time I learned more about Robyn and her community work in the greater Milwaukee community. I learned that she was one of the founding board members of Exploit No More, an organization that works to end child sex trafficking. I learned that she was also a founding member of Help Portrait MKE and The Milwaukee Portrait Project. I watched as she earned the United Way’s Philanthropic 5 award and American Mothers’ Wisconsin Mother of the Year.  I admired her greatly. She is the type of person that I hope I am becoming.

As we got to know each other, we exchanged mom tips. The sale on that girls winter coat, the not to miss dessert from a meal delivery service. My family attended her childrens’ performances, she attended my children’s performances. She was a member of my community doing valuable work, but she was also a friend.

I remember distinctly the moment I found out that Robyn was running as my State Representative. I had just dropped my daughter off at dance, and I’d pulled over to make sure she got into the building okay, didn’t run out to get anything. I turned my phone on and saw Robyn’s announcement. And I began to cry. I could not think of anyone better to represent me and my family than Robyn. I trust her judgement, and I trust her soul. When I retuned home, I burst in the door, shouting to my husband that Robyn was running for the legislature! I was so excited.

I had never worked on a political campaign before Robyn’s. I had made small donations, I had put up yard signs. But I had never knocked on doors or volunteered at political events. Well, I did. And I brought my oldest daughter along with me. I wanted her to see how important it was to volunteer your time and your effort when you believe passionately in a candidate.

After Robyn won her election and was sworn in as a State Representative, I immediately saw her hard work and her compassion in action. She authored Fair Maps legislation, she introduced legislation for universal changing tables, she introduced the Healthcare Heroes Act, and much more. And still she finds time to communicate to her constituents. I have written to Robyn on a number of issues. I never expect a response because I know that Robyn knows where I stand. I get one anyway. Every time. And throughout this campaign, I have heard a number of stories from constituents who are so amazed and grateful that Robyn has taken the time to respond to them as well, to hear their voices.

This February, I participated in the Moms Demand Action Day of Advocacy in Madison. My group was comprised of a number of Tosans, including high school students, as well as a couple people who were from other areas of Wisconsin. We were not scheduled to meet Representative Vining. However, our group ran into Robyn in the Capitol rotunda as we waited for our first scheduled meeting. She came over and greeted us, introduced herself to everyone who didn’t know her, took pictures with our group, and invited us to the Democratic Caucus. Our group and the other group with Tosa students were introduced to the Caucus, and, afterwards, Robyn ushered us out and thanked us again for coming and for speaking at the Capitol on an issue that was important to us. She then introduced us all to the Capitol Security at the door and explained their importance and how grateful she was for their service. That stuck with me. Robyn sees people. All the people. Whether they are her constituents or not. One of the non-Tosa members of our group told us over and over how lucky we were to have Robyn representing us.

It has been my absolute honor to work on this Faces of the 14th project. Because of the pandemic, things certainly look different during this campaign. Robyn’s volunteers are not knocking on doors; we are seeking other means of connecting safely with our District 14 neighbors. We are writing many, many postcards by hand and with love. And we are telling our stories. I have met some wonderful people through this project that I didn’t know before, and I have heard new stories from neighbors I have known for years. These are our stories, these are our people, this is what we think about when we go to the polls, when we fill out our ballots.

As I write this story, I once again have tears in my eyes. Because I still cannot imagine a person that I want representing my family more in the Wisconsin legislature than Robyn. – Elizabeth